Horgan on the evil of paradigms

In 1972 Thomas Kuhn hurled an ashtray at Errol Morris. Already renowned for The Structure of Scientific Revolutions, published a decade earlier, Kuhn was at the Institute for Advanced Study in Princeton, and Morris was his graduate student in history and philosophy of science.

During a meeting in Kuhn’s office, Morris questioned Kuhn’s views on paradigms, the webs of conscious and unconscious assumptions that underpin, say, Aristotle’s, Newton’s or Einstein’s physics. You cannot say one paradigm is truer than another, according to Kuhn, because there is no objective standard by which to judge them. Paradigms are incomparable, or “incommensurable.”

If that were true, Morris asked, wouldn’t history of science be impossible? Wouldn’t the past be inaccessible -- except, Morris added, for “someone who imagines himself to be God?” Kuhn realized his student had just insulted him. He muttered, “He’s trying to kill me. He’s trying to kill me.” Then he threw the ashtray at Morris and threw him out of the program.

Morris went on to become an acclaimed maker of documentaries. He won an Academy Award for The Fog of War, his portrait of “war criminal” — Morris’s term — Robert McNamara. His documentary The Thin Blue Line helped overturn the conviction of a man on death row for murder. ...

I agree, to an extent, with Morris’s take on Kuhn. I spent hours talking to Kuhn in 1992, when he was at MIT, and he struck me as almost comically self-contradicting. He tied himself in knots trying to explain precisely what he meant when he talked about the impossibility of true communication. He really did seem to doubt whether reality exists independently of our flawed, fluid conceptions of it.

Kuhn is dead now, and his followers are worse than he ever was. We should blame the living scholars who substitute paradigms for reality.

Morris proposes that postmodernism is an attractive ideology for right-wing authoritarians. To support this claim, he notes the scorn for truth evinced by Hitler and the current U.S. President, for whom power trumps truth. Morris suggests that “belief in a real world, in truth and in reference, does seem to speak to the left; the denial of the real world, of truth and reference, to the right.”

Horgan is right, and the reality deniers are almost all on the political left. The leftists are the ones who always want to ban facts and views from Amazon, Facebook, Google, Apple, and Twitter. Free speech is primarily championed by right-wingers.

The paradigm shifters are one major faction of reality deniers, and the other big faction is the quantum Bell-heads who argue that certain experiments have disproved realism. For example, see this recent paper.

The concept of "reality" is often raised in the context of philosophical foundations of physics or interpretations of quantum mechanics. When this term is so raised, it is a warning to me that I am about to be led down a rabbit hole. Such diversions usually lead nowhere unless you consider endless discussions of Schrodinger's cat, wave function collapse, quantum non-locality, and parallel universes to be useful. A prime example is the famous Einstein, Podolsky, and Rosen paper wherein they concluded that the quantum wave function cannot provide a complete description of physical reality. In this essay I suggest that, in physics discourse, the term "reality" should be avoided at all costs. 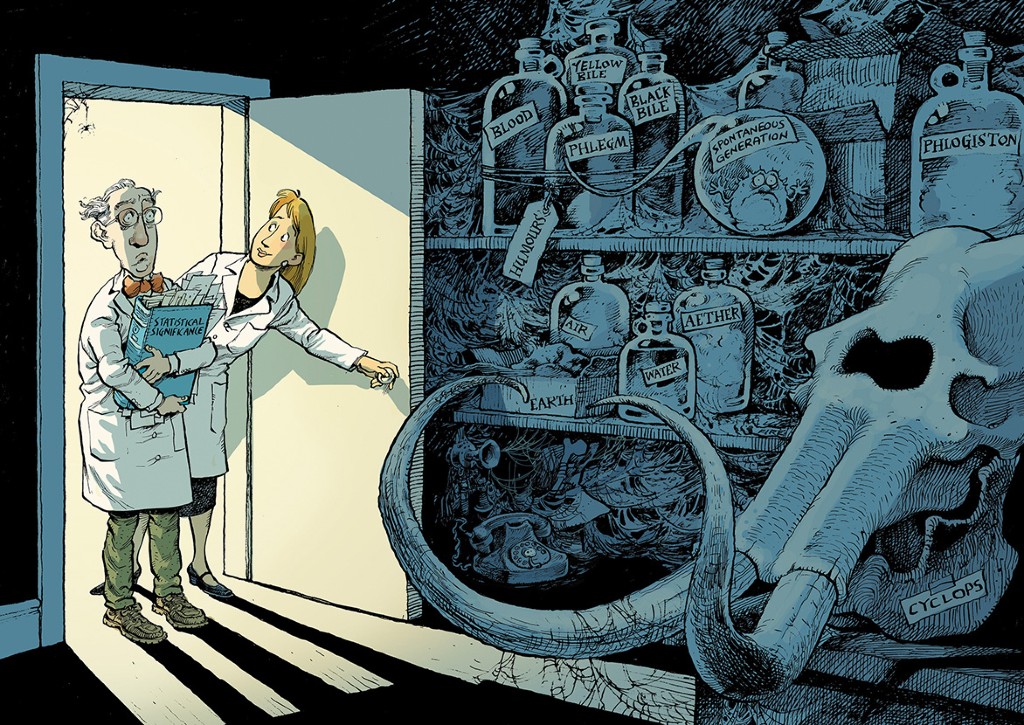 When was the last time you heard a seminar speaker claim there was ‘no difference’ between two groups because the difference was ‘statistically non-significant’? ...

The Nature article had 800 signatories endorsing it, which is a strange way to lobby for a scientific idea.

They are right that P-values are commonly abused, but that is because they are so useful. Replacing them with something else will not be so easy.
Posted by Roger at 8:00 AM