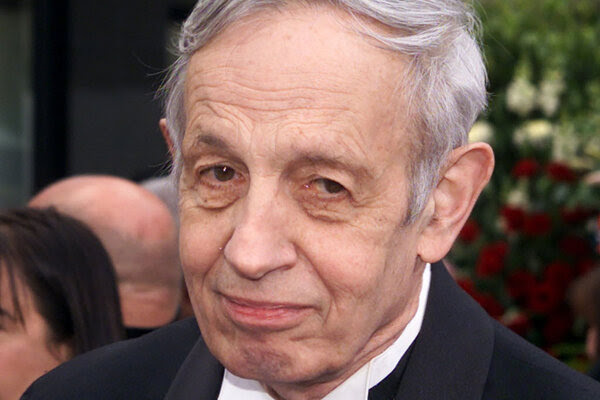 
John Forbes Nash Jr., a mathematical genius whose struggle with schizophrenia was chronicled in the 2001 movie "A Beautiful Mind," has died along with his wife in a car crash on the New Jersey Turnpike. He was 86.

Nash and Alicia Nash, 82, of Princeton Township, were killed in a taxi crash Saturday, state police said. A colleague who had received an award with Nash in Norway earlier in the week said they had just flown home and the couple had taken a cab home from the airport.

He was best known for the movie. It got a lot of complaints about accuracy, largely because there was material in the book that was omitted from the movie. But the accuracy of the book is also questionable, as it was an unauthorized biography and included a lot of hearsay. The movie was too long, and adding anything else probably would have required other omissions.

Some of the movie's inaccuracies were for dramatic effect, such as visual hallucinations. One outrageous lie was saying that drugs cured his schizophrenia; Nash says that he only took drugs when forced, and they never did him any good.

The title was stupid. What is beautiful about a schizophrenic mind? His math was beautiful.

This was another example of how Hollywood likes to portray mathematicians as mad geniuses. Other examples include Good Will Hunting, Pi, and Proof.

I was a student at Princeton when Nash was wandering the halls writing strange political numerology on the blackboards. Nobody bothered him, and he did not bother anyone else.

The movie is about his proof of an equilibrium in game theory and economics. In mathematics, he is mainly known for proving that any Riemannian (metric) manifold can be embedded in Euclidean space. So an abstract metric, such as what defines gravity in general relativity, can be realized as the metric inherited from a higher dimensional space.

(Technically, the GR metrics are not really metrics because they can be positive or negative, and Nash did not address that situation, but his ideas can be adapted.)

Dr. Nash’s theory of noncooperative games, published in 1950 and known as Nash equilibrium, provided a conceptually simple but powerful mathematical tool for analyzing a wide range of competitive situations, from corporate rivalries to legislative decision-making. Dr. Nash’s approach is now pervasive in economics and throughout the social sciences and applied in other fields as well, including evolutionary biology.

Harold W. Kuhn, an emeritus professor of mathematics at Princeton and a longtime friend and colleague of Dr. Nash’s who died in 2014, once said, “I think honestly that there have been really not that many great ideas in the 20th century in economics, and maybe, among the top 10, his equilibrium would be among them.” A University of Chicago economist, Roger Myerson, went further, comparing the impact of the Nash equilibrium on economics “to that of the discovery of the DNA double helix in the biological sciences.”

Dr. Nash also made contributions to pure mathematics that many mathematicians view as more significant than his Nobel-winning work on game theory. In one he solved an intractable problem in differential geometry derived from the work of the 19th century mathematician G. F. B. Riemann.

This may seem obvious now, but previous work on game theory by von Neumann and others was on cooperative games. For real world economic applications, you have to assume that no one is cooperating with anyone else.

He just collected the Abel Prize in Norway, and the most dangerous part of the trip was the New Jersey taxicab ride from the airport.
Posted by Roger at 8:00 AM