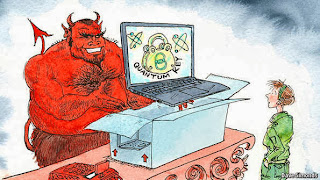 
In 1964 Bell proposed a test to settle once and for all whether quantum mechanics really is as weird as it famously appears to be, in that it allows for instantaneous communication between two particles, no matter how far apart they are, on condition that they were once entangled together in the same place. The short answer, as experiments carried out over subsequent decades have shown, is yes, it is.

No that is not correct. The theory and experiments show a correlation between measurements of the particles, but correlation does not imply causation. There is a Nobel Prize waiting for anyone who can show instantaneous communication, but no one ever has.


Bell’s test, however, also led physicists like Dr Ekert to a remarkable insight: made sufficiently sensitive the Bell test could be used to guarantee perfectly secure communication — even if the equipment used to send and receive those communications had been sold to you by a manufacturer subverted by your enemies.

More nonsense. Quantum cryptography does not even need entanglement. Yes, it can be done with entanglement, but there is no advantage to doing so.

None of these quantum crypto systems have ever been good for anything. The only argument for them is the belief that a physical assumption is somehow better than a mathematical assumption. But it is not.
Posted by Roger at 8:00 AM