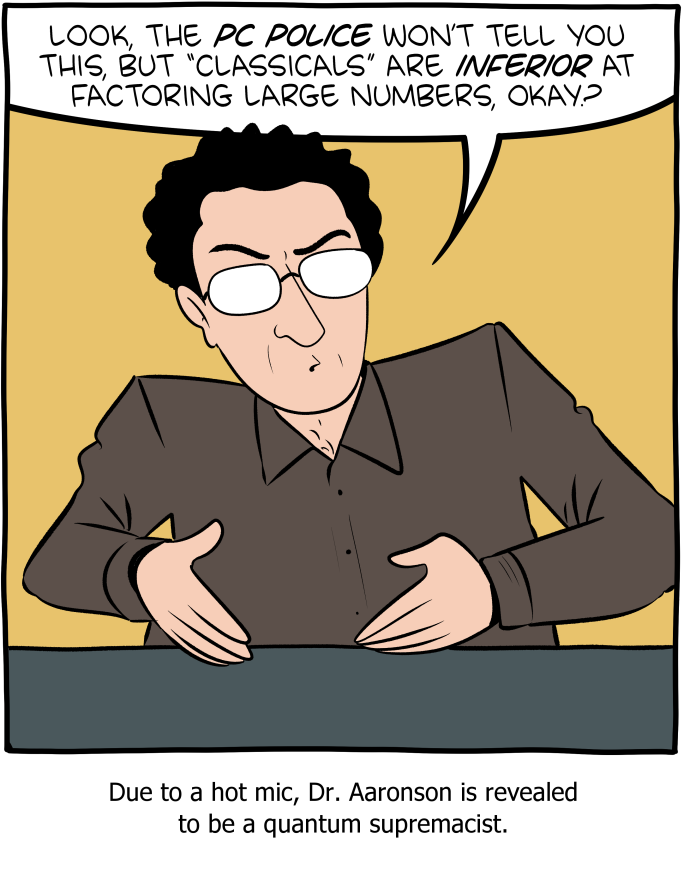 Computer complexity theory professor Scott Aaronson is freaked out about his leftist colleagues calling him a "quantum supremacist" in Nature and elsewhere. He is, quite literally, a quantum supremacist. He has staked his whole career on the concept, he has written one book on it and is writing another, he often talks it up to the news media, and he aggressively promoted Google's work as proof of quantum supremacy.

He defends his views:


The same half of me thinks: do we really want to fight racism and sexism? Then let’s work together to assemble a broad coalition that can defeat Trump. And Jair Bolsonaro, and Viktor Orbán, and all the other ghastly manifestations of humanity’s collective lizard-brain. Then, if we’re really fantasizing, we could liberalize the drug laws, and get contraception and loans and education to women in the Third World, and stop the systematic disenfranchisement of black voters, and open up the world’s richer, whiter, and higher-elevation countries to climate refugees, and protect the world’s remaining indigenous lands (those that didn’t burn to the ground this year).

In this context, the trouble with obsessing over terms like “quantum supremacy” is not merely that it diverts attention, while contributing nothing to fighting the world’s actual racism and sexism. The trouble is that the obsessions are actually harmful. For they make academics — along with progressive activists — look silly. They make people think that we must not have meant it when we talked about the existential urgency of climate change and the world’s other crises. They pump oxygen into right-wing echo chambers.

As this makes clear, he is a Jewish supremacist, and not a White supremacist. He, along with most other secular academic Jews, favors policies that replace Whites with non-whites. He even refers to non-Jews as sub-human ("lizard-brain").

I don't want to discuss impeachment politics here, but Aaronson is saying that his commonplace arrogant Jewish leftist Trump-hating politics should somehow excuse him being an avowed quantum supremacist. No, it is just the opposite. He shows the same sort of illogical thinking in both arguments.

After writing this, I see that Aaronson responds to a comment:


Regarding your “provocative bit,” I confess that being Jewish never once crossed my mind when I wrote about “reclaiming” the word supremacy.

(Having said that: if, according to the Official Regulations of Wokeness, being Jewish, a member of one of humanity’s longest-persecuted identity groups, grants my voice and perspective some sort of special consideration from my opponents in these discussions, I hereby wish to claim the special consideration now. 😀 )

By “reclaiming” I simply meant: reclaiming the word “supremacy” from the racists, for and on behalf of all decent human beings, for the latter to use as a common inheritance.

This is just more confirmation that he is a Leftist Jewish Supremacist.

First, he was obviously conscious of his Jewishness because he talks about Whites as people different from himself.

Second, Jews are humanity's most privileged group, not its most persecuted.

Third, he explicitly claims Jewish privilege, as if that makes him superior to non-Jews.

Fourth, the word "supremacy" is not a word used by the "racists" he decries. There are a few people who call themselves white nationalists or white advocates, but I have never heard any call himself a white supremacist. It is entirely a term used by leftist anti-white organizations like the SPLC or NY Times. He is not reclaiming it from racists.

Fifth, the word supremacy is used all the time in contexts that have nothing to do with race.

Update: Aaronson brings in his fellow professor (and evolutionist/atheist/leftist/psychologist/linguist) Steve Pinker to argue:

To state what should be obvious: nip is not a sexual word. ... Men have nipples too, and women’s nipples evolved as organs of nursing, not sexual gratification. Indeed, many feminists have argued that it’s sexist to conceptualize women’s bodies from the point of view of male sexuality.

This is way out of my expertise, but it is not obvious to me. Men don't breastfeed, so nursing is plainly sexual, and most moms enjoy doing it. Humans would have died out a long time ago otherwise. It seems plausible to me that women's nipples evolved for sexual gratification.

I wanted to agree with Pinker's larger point, but his reasoning doesn't make much sense.

5. I believe there still exist men who think women are inferior, that they have no business in science, that they’re good only for sandwich-making and sex. Though I don’t consider it legally practicable, as a moral matter I’d be fine if every such man were thrown in prison for life.