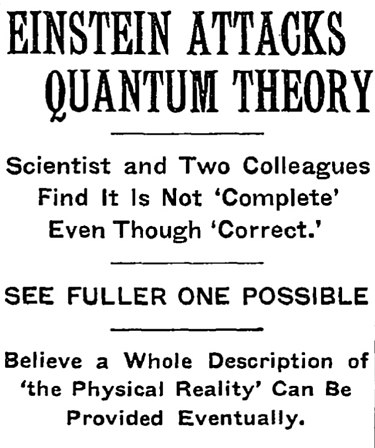 The Nobel Prize news has everybody talking about quantum spookiness, even though the Nobel committee did not endorse any of it.

Sabine Hossenfelder @skdh
Just a reminder that what Einstein referred to as "spooky action at a distance" was not entanglement but the non-local update (aka "collapse") of the wave-function. Entanglement is a non-local correlation but it's locally created, there is nothing "spooky" about it.

Why do I say this? B/c Einstein in his first arguments about the spooky action didn't use entangled particles. He used a single particle whose wave-function spreads in space & that is then then measured in one point, which instantaneously (non-locally) collapse the wave-function.

She is correct. The clip is from the NY Times, which used to idolize Einstein and endorse whatever he was doing.

Articles about quantum mechanics go on and on about spookiness, paradoxes, non-reality, incomprehensibility, etc. My complaint about this is that they are often telling about things that would be true in any theory.

In classical mechanics, two particles can have a common origin, and so measurements of them will be correlated. That is what entanglement is. Also classical Bayesian inference requires updating distributions and probabilities. That is essentially the same as collapse of the wave function.

You will say that QM is different because Bell proved that the quantum correlations are higher. They can be 80% instead of 75%. Yes, but this is a pretty subtle difference, and not worthy of all the hyped nonsense. It is not the difference between reality and non-reality.

There is a lot of confusion about entanglement. Schroedinger coined the term, and said it was the essence of quantum mechanics. He is also known for his famous cat, which illustrates superposition can collapse, but not entanglement. Superposition also has classical analogues, as in any theory that says two outcomes are possible.

The Universe Is Not Locally Real, and the Physics Nobel Prize Winners Proved It

One of the more unsettling discoveries in the past half century is that the universe is not locally real. “Real,” meaning that objects have definite properties independent of observation — an apple can be red even when no one is looking; “local” means objects can only be influenced by their surroundings, and that any influence cannot travel faster than light. Investigations at the frontiers of quantum physics have found that these things cannot both be true. Instead, the evidence shows objects are not influenced solely by their surroundings and they may also lack definite properties prior to measurement. As Albert Einstein famously bemoaned to a friend, “Do you really believe the moon is not there when you are not looking at it?”

This is, of course, deeply contrary to our everyday experiences. To paraphrase Douglas Adams, the demise of local realism has made a lot of people very angry and been widely regarded as a bad move.

Blame for this achievement has now been laid squarely on the shoulders of three physicists: John Clauser, Alain Aspect and Anton Zeilinger. They equally split the 2022 Nobel Prize in Physics “for experiments with entangled photons, establishing the violation of Bell inequalities and pioneering quantum information science.”

Note that the Nobel citation is for experimental work, and not for any views or conclusions about quantum foundations, reality, or locality.

Physicists skeptical of quantum mechanics proposed that there were “hidden variables,” factors that existed in some imperceptible level of reality beneath the subatomic realm that contained information about a particle’s future state. They hoped in hidden-variable theories, nature could recover the local realism denied to it by quantum mechanics.

“One would have thought that the arguments of Einstein, Podolsky and Rosen would produce a revolution at that moment, and everybody would have started working on hidden variables,” Popescu says. ...

The lack of interest was driven in part because John von Neumann, a highly regarded scientist, had in 1932 published a mathematical proof ruling out hidden-variable theories.

No. Quantum mechanics had been spectacularly successful in 1930, and von Neumann had a seemingly convincing argument that hidden variable theories were impossible as an alternative. EPR had some philosophical objections based on Elements of Physical Reality. Some say that is what EPR really stands for. Nobody cared at the time because everyone was convinced that quantum mechanics was right and hidden variable theories were wrong.

But this is not news. The conventional wisdom in 1932 was that they were wrong.

So what does any of this have to do with reality and locality? Nothing. It has been known since the Heisenberg Uncertainty principle of 1926 that measurements must be made to get definite values for observables. If that causes you to make a philosophical comment about the world not being real, you could have said that in 1926.

I don't disagree with the Nobel for Clauser et al, since it was specifically given narrowly for experimental work. They did some fine experiments confirming existing knowledge. But they did not prove anything about reality, locality, foundations, information, cryptology, or quantum computation. And the Nobel committee pointedly avoided saying that they did.

A lot of people have been pushing for a Bell Test Nobel Prize for decades, because they wanted an official endorsement of the goofy ideas in the above SciAm article. But no, the Swedes did not do that.

Normally, hidden-variable theories and quantum mechanics predict indistinguishable experimental outcomes. What Bell realized is that under precise circumstances, an empirical discrepancy between the two can emerge.

No, that is wrong. Normally hidden variable theories have the observables commute, and there is no Heisenberg Uncertainty. Quantum mechanics from 1926 was premised on noncommuting observables, and the consequential Heisenberg Uncertainty. From that point on, no one, except maybe Einstein and a few other stubborn resistors, thought that hidden variables could be consistent with QM.

As it turned out, Bohm showed that nonlocal hidden variables might be consistent with QM. But nonlocal variables were spooky and unrealistic, and no one wanted them, not even Einstein.

In 1967, John Clauser, then a graduate student at Columbia University, accidentally stumbled across a library copy of Bell’s paper and became enthralled by the possibility of proving hidden-variable theories correct. ...

Unfortunately for Clauser and his infatuation with hidden variables, once he and Freedman completed their analysis, they could not help but conclude that they had found strong evidence against them.

That's right. Clauser was out to prove QM wrong. The whole point of the Bell test experiments was to disprove QM. They could win a Nobel Prize for that, but not for confirming what everyone already knew.

There are physicists doing wonderful experiments testing whether energy and momentum are conserved. If they ever find a violation of a conservation law, they will be big heroes for discovering a new phenomenon. But they do not win any prizes for just confirming known laws.

What Bell tests allow physicists to do is remove the bias of anthropocentric aesthetic judgments from the equation; purging from their work the parts of human cognition that recoil at the possibility of eerily inexplicable entanglement, or that scoff at hidden-variable theories as just more debates over how many angels may dance on the head of a pin. The award honors Clauser, Aspect and Zeilinger, but it is testament to all the researchers who were unsatisfied with superficial explanations about quantum mechanics, and who asked their questions even when doing so was unpopular.

Wow, I don't even know what this is saying. It was never unpopular to do an experiment confirming QM. And purging the bias of human cognition? That is just nuts.

We have a trillion dollar semiconductor and laser industry founded on QM. The theory is not wrong. I just read somewhere that the world now makes 20 trillion transistors every second. They are understood with QM. The Bell test experiments are nice, but they did not tell us anything new.