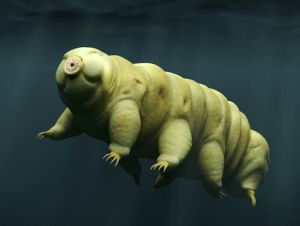 FQXi brags that one of the hot new advances of 2021 was entangling a qubit with a tardigrade.

It strikes me that no one who saw quantum mechanics as a profound clue about the nature of reality could ever, in a trillion years, think that superdeterminism looked like a promising route forward given our current knowledge. The only way you could think that, it seems to me, is if you saw quantum mechanics as an anti-clue: a red herring, actively misleading us about how the world really is. ...

One of the wonderful things about science is that, if a theory is not only giving you no gains in explanatory power but is actually giving you a loss, you always have the option to reject the theory with extreme prejudice, as I’d recommend in the case of superdeterminism. ...

One of the wonderful things about science is that, if a theory is not only giving you no gains in explanatory power but is actually giving you a loss, you always have the option to reject the theory with extreme prejudice, as I’d recommend in the case of superdeterminism.

He is right. With superdeterminism, there is no underlying theory that makes any sense. There is no way to test it, even if there were. If you choose to accept it, you get no gain in explanatory or predictive power. And you are forced to reject nearly all of today's science. It really is as bad as it sounds.

But Scott fails to grasp that the same could be said of Many-Worlds theory. It is just as bad. It is impossible for anyone with a clue to defend it.

I see superdeterminism as having roughly the same scientific merit as creationism. Indeed, superdeterminism and creationism both say that the whole observed world is, in a certain sense, a lie and an illusion (while denying that they say this). They both consider this an acceptable price to pay in order to preserve some specific belief that most of us would say was undermined by the progress of science. For the creationist, God planted the fossils into the ground to confound the paleontologists. For the superdeterminist, the initial conditions, or the failure of Statistical Independence, or the global trajectory-selecting principle, or whatever the hell else you want to call it, planted the random numbers into our brains and our computers to confound the quantum physicists. Only one of these hypotheses is rooted in ancient scripture, but they both do exactly the same sort of violence to a rational understanding of the world.

He seems to mean Young-Earth creationism, which is a modern Protestant evangelical invention. I actually think superdeterminism and Many-Worlds are worse. Creationism does not deny your free will and your ability to rationally anaylize the data.

Update: Aaronson endorsed Many-Worlds in 2018. He made all the same errors as the superdeterminists.

Aaronson is wrong about this. Many-worlds theory cannot make a prediction. All possibilities happen, in parallel worlds. No worlds are any more probable than any others. You can never prove anyone wrong about anything, because the many=worlds advocate will just say that his prediction was true in a parallel world that we cannot observe.

Many-worlds says that the whole observed world is a lie and an illusion, because it is all just a parameter space of every possibility. Nothing you do is real, as you just slip into splitting worlds. There is no rational understanding of the world.

More precisely, it was designed to avoid all experimental predictions. If you say that all possibilities happen in the parallel worlds, then no matter what happens, you can say it is consistent with the prediction because we happen to be in the world that has what is seen.

Many-worlds is never able to predict any better than that.

How is super-determinism different from ordinary, Newtonian determinism? And in particular: what objections against superdeterminism (especially those revolving around our ability or in ability to do scientific experiments) do not work equally well against ordinary determinism?

With ordinary Newtonian determinism, there’s no global constraint affecting our brains or our random number generators: you just fix the initial conditions and then iterate forward. You still have effective probability because of your ignorance of microstates, so you can still build effective random number generators and use them to choose the control group in your vaccine trial. The fact that you “couldn’t have chosen otherwise” can be left to the philosophers, just like it is in our world.

The trouble with superdeterminism is not the determinism but the “super”: that is, the global constraints that prevent you from making effectively random choices and therefore from doing most scientific experiments. Once you’ve introduced that, you can use it to explain (or explain away) basically any experimental result, according to your convenience.

Yes, that is correct. But many-worlds likewise lets you explain away basically any experiments.

Many-worlds forbids randomness. There are world splittings instead. Those splittings do not come with probabilities. Your choices are not constrained, as in superdeterminism, but illusions. Either way, they are not what they appear to be.