Standard Model of Physics at 50 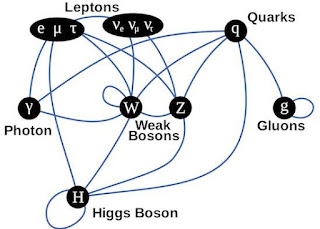 
The Standard Model (of Physics) at 50

It has successfully predicted many particles, including the Higgs Boson, and has led to 55 Nobels so far, but there’s plenty it still can’t account for

Just over a half-century ago, the physicist Steven Weinberg published a seminal paper titled “A Model of Leptons in the journal Physical Review Letters.” It was just three pages long, but its contents were revolutionary: in the paper, Weinberg outlined the core of the theory now known as the Standard Model, which governs elementary particles.

If this was really such a great paper, then why didn't anyone notice at the time?

The paper proposed a model for electroweak interactions. It was the same as quantum electrodynamics, except that the gauge group was U(2) instead of U(1), a Higgs field was added to make the weak force short range, and no one knew how to cancel the infinities.

The idea of using U(2) for weak/electroweak was due to Schwinger and Glashow in 1961, and the idea of using a Higgs was due to Higgs and others in 1964. A scheme for canceling infinities in a gauge theory was published by 'tHooft in 1970.

So Weinberg's paper was no big deal at the time. It did not solve any physical problem. It wasn't much of a theory, because he had no way of computing anything. By 2015, it had 9289 citations, no. 2 on the list.

I am not trying to put down Weinberg, but he and Salam lucked into that Nobel prize. The works of Higgs and 'tHooft were more essential to creating the Standard Model.

The SciAm author ends with a complaint about a physics party:

And one Nobel laureate, who shall go unnamed, proceeded to frame our introduction by stating I was clearly invited because I was pretty, and that I looked old enough to finish my PhD already. (The Nobel Prize in Physics is still such an old boys club that only two women have ever won the prize out of 207 recipients. The last was in 1962 — a greater gap than in any other field, and not for a lack of good scientists.)

I guess she is saying that female physicists were unfairly deprived of Nobel prizes, but maybe they were too pretty, or taking care of babies instead of finishing a PhD.
Posted by Roger at 8:00 AM