Tycho was the greatest astronomer 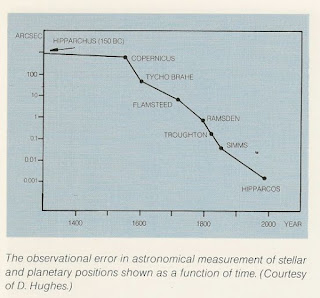 Tycho Brahe was a brilliant astronomer who probably did more to advance accurate observations than anyone.

I got the chart from the recent paper, Astrometric accuracy during the past 2000 years. It has other similar charts.

It shows a lot of later advances in accuracy, but those are mainly technological advances.

At Tycho's time, there had been very little advance in astronomy over the previous millennium. The telescope still had not been invented, but Tycho collected better data than everyone before him put together.