Jerzy Kocik writes a new paper on a Geometric diagram for relativistic addition of velocities:


A geometric diagram that allows one to visualize the Poincaré formula for relativistic addition of velocities in one dimension is presented. An analogous diagram representing the angle sum formula for trigonometric tangent is given. ... 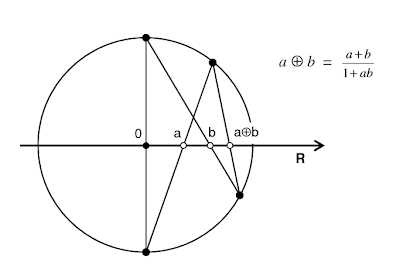 IV. HISTORICAL NOTE The relativistic velocity addition formula first appears in the letter of Poincaré to Lorentz, roughly in May 1905, and was presented to the French Academy of Science in 6 June of the same year. Basic ingredients of relativity principle were presented by Poincaré at the world scientific conference in St Louis in September 1904. Poincaré also noted that the expression d2 = x2 + y2 + z2 − c2t2 defines a relativistic invariant. Although he used 4-vectors, Poincaré did not pursue the geometric consequences. It was Hermann Minkowski who followed up on this idea in 1907. Albert Einstein decisively removed the concept of ether and simplified the derivation of Lorenz’ transformation rules in 1905.

He gives a very nice and simple geometric interpretation of the special relativity velocity-addition formula. I am surprised that no one discovered it before.

The paper also gives an accurate historical account. The velocity addition formula is maybe the most important 1905 Einstein discovery that was not already published by Lorentz. But Poincare had it earlier and Einstein did not have the geometric consequences.
Posted by Roger at 8:00 AM