Others disappointed with the Bruno multiverse 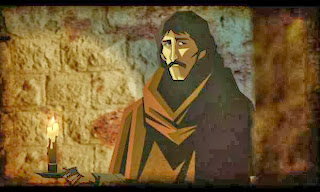 I am still annoyed at the Cosmos TV show. Neil deGrasse Tyson had previously refused to join the atheist anti-religion cause, so I am surprised that he got conned into the Bruno multiverse nonsense.

I re-watched the original Cosmos a few years ago, some of the episodes with my kids. They are still fun to watch, but I realized something in seeing them again. Sagan made mistakes. Big mistakes, as with Hypatia and the burning of Library of Alexandria ...

I was looking forward to the new Cosmos.  But I saw the trailer and Bruno getting burned, so I knew it was just going to be more of the same. but I didn’t know how much more of the same it would be. ...

I think they chose Bruno because somebody said Galileo was getting a bit old, let’s find another scientist that religious people persecuted. Then they hit a problem. There really are not that many besides Galileo. In fact, there aren’t really any more good examples, at least not in Catholic Europe, where the Church over the ages was stuffed full of scientists and scientists-wannabes, ...

Problem was, Bruno was not much of a scientist, he was a weird mystic hermeticist who liked to insult people.

That's right. If the Catholic Church were really so anti-science and anti-knowledge, couldn't they find a another example?

And, of course, it is no accident that Giordano Bruno appeared in the first episode of “Cosmos.” Because whether or not Bruno himself was a scientist, there’s not a whole lot, besides their relative lack of access to killer barbeque tools, that differentiates the current crop of intelligent design advocates and Texas textbook revisionists and inheritors of the Moral Majority mantle from the shame and terror of the Holy Inquisition.

His belief in an infinite universe, reflecting the infinite glory of God, got Bruno shunned and exiled from country after country. He grew impoverished and largely friendless, but refused to recant. Eventually Bruno was imprisoned by the Church, and burned at the stake in 1600–10 years before Galileo announced his first observations that confirmed Copernicus was right.

That depiction in the new Cosmos matches the standard textbook story of Bruno, but it is misleading and in some ways downright wrong.

Hank Campbell points out that Sean M. Carroll is a fan of the Bruno multiverse, and writes:

Then suddenly we get a claim that Giordano Bruno is responsible for the concept of the universe - because he read 'banned' books. Lucretious wasn't science - there was no scientific evidence for his claim that wind caused earthquakes or worms spontaneously generated - it was philosophy, and his book was not rare in 1600 AD, people were also not martyred for reading it, and yet we get told a philosophical belief in infinity was what got Bruno into trouble.

It's an immediate disconnect for people who know science history because it smacks of an agenda. I instead object because it is flat-out incorrect. To claim that Bruno promoted the concept of the universe, a "soaring vision", despite persecution, while simultaneously being hired over and over by the institutions we are told were oppressing him, makes no sense. That segment of the show makes it sound like he was a devout Christian tormented by reason rather than what he was - a cultist who engaged in confirmation bias to pick and choose anything that matched his beliefs.(1)

Bruno's "science" was never mentioned during his trial, he was on trial for being a cult worshiper. He only took up the cause of Copernicus because he believed in the Egyptian god Thoth and Hermetism and their belief that the Earth revolved around the Sun, not because he had perceived anything radical. Galileo rightly dismissed most of Bruno's teachings as philosophical mumbo-jumbo. Bruno was only revived as a 'scientist' and a martyr for science by anti-religious humanists in the 19th century.The church didn't even bother to ban his writing until well after he was dead.

Bruno was not a martyr for science, the way the cartoon in Cosmos: A Spacetime Odyssey alleges, he was a martyr for magic. He actually was a heretic.

Two reactions: 1) That’s not the real story. 2) With no evidence either way, how does holding to one superstition over another make Bruno an example for science?

The ignorance is appalling. “The Catholic Church as an institution had almost nothing to do with [the Inquisition],” writes Dayton historian Thomas Madden. “One of the most enduring myths of the Inquisition,” he says, “is that it was a tool of oppression imposed on unwilling Europeans by a power-hungry Church. Nothing could be more wrong.” Because the Inquisition brought order and justice where there was none, it actually “saved uncounted thousands of innocent (and even not-so-innocent) people who would otherwise have been roasted by secular lords or mob rule.” (His emphasis.)

As for Bruno, he was a renegade monk who dabbled in astronomy; he was not a scientist. There is much dispute about what really happened to him. As sociologist Rodney Strong puts it, he got into trouble not for his “scientific” views, but because of his “heretical theology involving the existence of an infinite number of worlds—a work based entirely on imagination and speculation.”

Before we begin, just who was Bruno?

He was a Dominican friar who lived from 1548 to 1600. He was not a scientist, conducted no experiments, looked through no telescopes, and wrote no scientific works. He was a mystic, a radical heretic, and an occultist. He abandoned Christianity in favor of Hermeticism (believed to be derived from ancient Egyptian wisdom) and magic.

Giordano Bruno, who enjoyed the patronage of King Henry III after abandoning his monastery, is shown as a poor and wretched drifter.

His place in a documentary ostensibly about science is inexplicable. Actual scientists worked on similar ideas, but only Bruno is called out in a ten-minute long segment.

The question is: why?

The narration begins by telling us that in “1599 everyone knew the sun, planets and stars were just lights in sky revolving around the earth.” It was “a universe made for us.” And “there was only one man who envisioned an infinitely grand cosmos.”

We’re barely seconds into this farrago and we have our first lie.

“Everyone” knew the earth was the center of the universe?

Wow, who’s going to tell Copernicus? Kepler? Stigliola? Diggs? Maestlin? Rothmann? Brahe? All of them believed in models of the cosmos that were not considered orthodox, and lived at the time of Bruno. All of them escaped the fire, and indeed weren’t even pursued by the Inquisition. Right here we have the major lie at the heart of modern anti-religious scientific propaganda: the war between faith and science.

We’re supposed to just assume this ignorant backwards world of the past hates smart people. Tyson himself says it matter-of-factly: “How was [Bruno] spending New Year’s Eve [in 1599]? In prison, of course.”

Of course! Because that’s what the Church does to smart people! Bad church! Bad!

Next: “This was a time when there was no freedom of thought in Italy.”

God, I really hate it when historical illiterates try to read church history through a modernist lens.

I don't really mind the atheist materialist agenda, if the scientists would stick to legitimate facts and science. But this is an attempt to promote completely unscientific reasoning in favor of a foolish multiverse belief system, both by Bruno in 1600 and by silly publicity seekers like Sean M. Carroll today.

Even the New York magazine review sees the show as left-wing anti-religion propaganda:

This new Cosmos is not so easygoing. The post-1980s rise of the Evangelical right wing created a hostile environment for ­science and science teachers. Recently, Louisi­ana governor Bobby Jindal became the latest conservative politician to ominously warn of a war on religion, even as certain public-school districts allow the discussion of creationism to undermine evolution in classrooms — a development that would have been unthinkable 30 years ago. Bill Nye, the former host of Bill Nye, the Science Guy, recently took part in an evolution debate with Ken Ham, ...

The new Cosmos feels like a pushback against faith’s encroachments on the intellectual terrain of science.

No, the Louisiana schools are not teaching creationism, and debates over evolution have gone on for over a century. Faith or religion is not interfering with science in any significant way. Not in the Western world, anyway. Has religion ever censored a scientific publication? Gotten an atheist fired? The mainstream Christian and Jewish religions have no quarrel with science at all. I realize that some religious folks have some beliefs contrary to modern science, but they have no power over the scientific community whatsoever.

I wrote a book on how physics has lost its way, and idolizing the Bruno multiverse is an excellent example.

I quoted a Catholic and an atheist also. I credit them all for pointing out historical and scientific errors in a popular TV show. I understand that some people are motivated to defend religion, while others are motivated to attack it. One thing I have liked about Tyson is that he is a science enthusiast, without getting bogged down into political or religious battles. I am happy to credit someone with a different view if he is correct about something.

Update: Leftist-atheist-evolutionist Jerry Coyne organized a campaign to censor a class that mentioned intelligent design and praised the Ball State U. president for saying "Intelligent design is overwhelmingly deemed by the scientific community as a religious belief and not a scientific theory." Then he attacks Casey Luskin for saying that religion had something to do with the issue. I don't mind criticism of religion, but the new Cosmos and Coyne's blog are just weirdo religious hatred. And my quoting Luskin is not an endorsement of his religious views, as I don't even know what they are.

Update: Also unhappy with the Cosmos treatment of Bruno is the pro-evolution anti-intelligent-design site NCSE, saying:

As our own Peter Hess observed, the first episode took a long detour from its history of the cosmos to tell a cartoonish history of Giordano Bruno. The intent seems to have been to revive the long-debunked and historically-discredited metaphor of warfare between science and religion.

The site is very happy with the "somewhat spiritual defense of evolution" in the second episode.
Posted by Roger at 8:00 AM