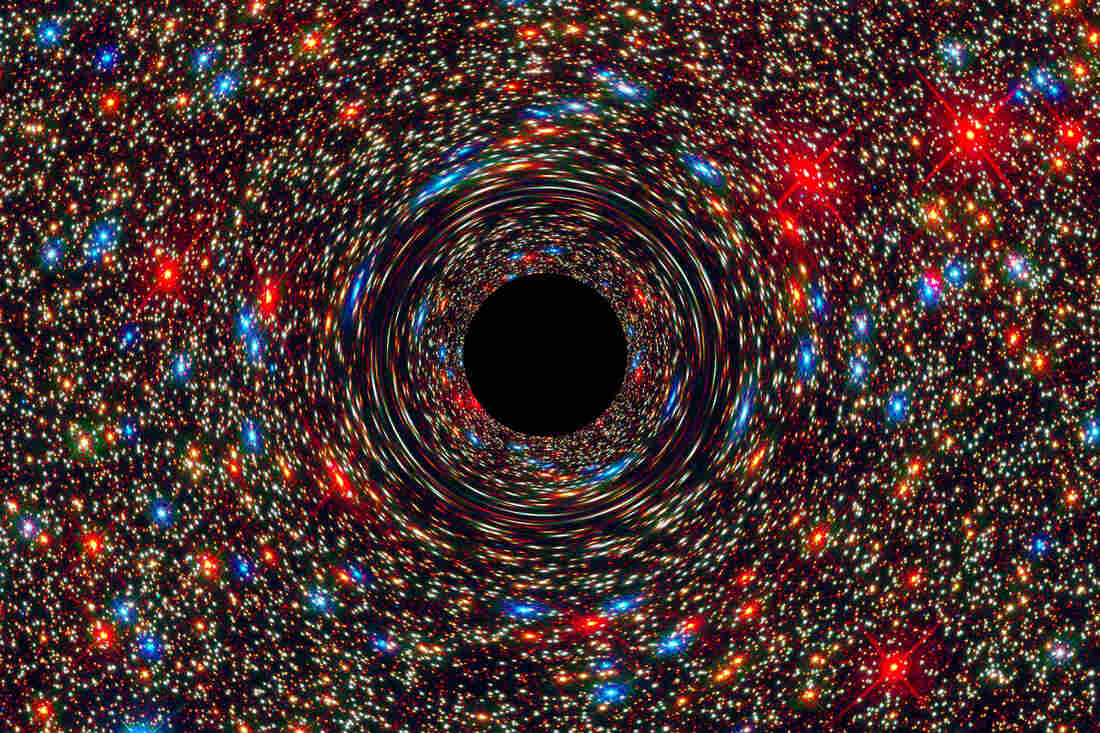 Conventional wisdom is that the strongest argument against the Standard Model of high-energy physics is the existence of dark matter. There is now very strong astronomy evidence that galaxies are held together by masses that we cannot see. The observable mass cannot account for all the necessary gravitational forces. The missing mass must be some sort of dark matter that is away from the center of the galaxy.

The consensus is that there must be some new invisible particle. Many thousands of physicists are looking for it at the CERN LHC and in exotic detectors.

But maybe there is no missing particle, the Standard Model is right, and the missing mass is in black holes?


Scientists have discovered a supermassive black hole that may be the biggest ever spotted — and its location in a ho-hum group of galaxies suggests that cosmic monsters like this one might be more common than astronomers previously thought.

The newly discovered black hole is about 17 billion times more massive than our sun. Another black hole is currently listed in the Guinness World Records as the heaviest, because it may be as much as 21 billion solar masses. But the measurement of that black hole was not very precise and it might actually be less massive than the new one, which is described in this week's issue of the journal Nature.

"It has highest confidence of anything I've seen of being the largest black hole," says Karl Gebhardt, an astrophysicist at the University of Texas, Austin and expert on black holes. He was not involved in the study.

Astronomers know only of a few black holes that have reached this mind-boggling size. Garden-variety black holes that form at the end of a star's life are much, much smaller. The recent observation of gravitational waves, for example, detected ripples from the merger of two black holes that were each roughly 30 times the mass of the sun.

And then there are the so-called supermassive black holes that can be found at the center of galaxies, like the one in our own Milky Way. "I hate to call that one puny, but it has only 4 million solar masses, and we found one that is 17 billion solar masses," says Chung-Pei Ma, an astronomer at the University of California, Berkeley who led the research in the Nature study.

What strikes her is that this beast lives in what she called "a cosmic backwater," an average-looking group of galaxies. The only other known black holes that are about this size were found in dense clusters of very large galaxies.

"It's sort of like, you would expect to find skyscrapers at the center of Manhattan, but this one is more like finding a very, very tall building somewhere in a small town in the U.S. where you would not expect to see something so big," Ma says. "It gives the possibility that these monster black holes are much more common than previously thought."

There are also the medium-sized black holes that LIGO claimed to discover, and I mentioned the possibility that they may account for dark matter.

Black holes form from collapsing stars. So they are all bigger than our Sun. They can get bigger by swallowing up dust, stars, and other black holes. If there are giant monster black holes, then black holes must come in all sizes, from the star up to the monster.

Black holes, contrary to their common image, have the same gravitational effects as any other equal mass in their place. They will draw objects nearby towards them, just as any other planetary body does, except at very close distances.[185] If, for example, the Sun were replaced by a black hole of equal mass, the orbits of the planets would be essentially unaffected. A black hole can act like a "cosmic vacuum cleaner" and pull a substantial inflow of matter, but only if the star it forms from is already having a similar effect on surrounding matter.[186]

I think that this is wrong. Block holes act as cosmic vacuum cleaners much more than people think.

Black holes get to be big somehow. To get so large, they have to pull in matter at a much greater scale than stars ever do. Stars do not get to be so large.

Black holes date back to Michell and Laplace (1783), Schwarzschild (1916), Chandrasekhar (1931), and Penrose and Hawking (1960s). Didn't it occur to any of these guys that black holes might be essential for galaxy formation, and for stabilizing galaxy rotation? The science fiction writers probably worried about accidentally running into black holes, but didn't anyone else take the possibility that black holes were common and structurally essential to galaxies?
Posted by Roger at 8:00 AM