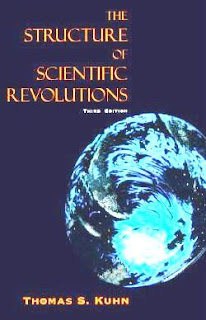 Fifty years ago this month, one of the most influential books of the 20th century was published by the University of Chicago Press. Many if not most lay people have probably never heard of its author, Thomas Kuhn, or of his book, The Structure of Scientific Revolutions, but their thinking has almost certainly been influenced by his ideas. The litmus test is whether you've ever heard or used the term "paradigm shift", which is probably the most used – and abused – term in contemporary discussions of organisational change and intellectual progress. ...

Kuhn's encounter with the scientific work of Aristotle turned out to be a life- and career-changing epiphany. ... By the standards of present-day physics, Aristotle looks like an idiot. And yet we know he wasn't. Kuhn's blinding insight came from the sudden realisation that if one is to understand Aristotelian science, one must know about the intellectual tradition within which Aristotle worked. ...

Kuhn's central claim is that a careful study of the history of science reveals that development in any scientific field happens via a series of phases. ...

But what really set the cat among the philosophical pigeons was one implication of Kuhn's account of the process of paradigm change. He argued that competing paradigms are "incommensurable": that is to say, there exists no objective way of assessing their relative merits. There's no way, for example, that one could make a checklist comparing the merits of Newtonian mechanics (which applies to snooker balls and planets but not to anything that goes on inside the atom) and quantum mechanics (which deals with what happens at the sub-atomic level). But if rival paradigms are really incommensurable, then doesn't that imply that scientific revolutions must be based – at least in part – on irrational grounds? In which case, are not the paradigm shifts that we celebrate as great intellectual breakthroughs merely the result of outbreaks of mob psychology? ...

In the meantime, if you're making a list of books to read before you die, Kuhn's masterwork is one.

Read The Structure of Scientific Revolutions to see how professors could deny that science makes progress towards truth. This silly academic book has sold 1.4 million copies, far more than any comparable work.

The concept of incommensurable paradigms is nonsense. Of course it is possible to make a checklist comparing the merits of Newtonian and quantum mechanics.

Kuhn never did explain his supposed Aristotle epiphany. Aristotle did not have a quantitative theory of motion. Kuhn partially explains what he meant, but not completely. I think that he exaggerates to support his dubious paradigm theory.

My only epiphany with Aristotle's physics was in seeing what is wrong with this
answer:

What is the difference between natural motion and violent motion?

This is Aristotelean philosophy and is about 400 years out of date.

Artistotle divided motion into the 'natural' motions and the 'violent' motions. Natural motions were those motions that objects naturally did: objects on earth fell towards the center of the earth. Heavenly objects naturally moved in circles. Violent motion was *anything* other than this. So, to pick up a rock was considered a violent motion.

This view of physics was completely replaced when Issac Newton published his laws of motion in 1687. It had been challenged by Galileo and Kepler in the early 1600's. No physicist today sees Aristotle's views as having any validity whatsoever. They have been thoroughly debunked.

In Newton's view, all acceleration is just response to forces, and there is no distinction between natural and violent.

But Newton's view is not the modern view. According to relativity, gravity is not really a force, and gravitational acceleration is really just natural motion. Technically they are spacetime geodesics. Other kinds of motions are violent in the sense that they are not geodesics. Aristotle's view is actually quite similar to the modern distinction between geodesic and non-geodesic motion.

Before my Aristotelian epiphany, I would have agreed that "No physicist today sees Aristotle's views as having any validity whatsoever." Now I think that he was making a brilliant observation about motion.
Posted by Roger at 8:00 AM