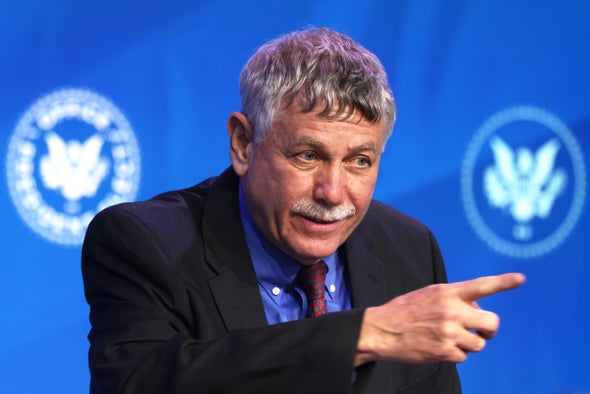 Nominations that reflect America’s diversity of backgrounds and experiences should be the norm. That we are now celebrating so many firsts speaks to how far we still have to go to make society equitable and just.

Despite this slate of diverse leadership, we can’t help but notice that the recently announced nomination of presidential science adviser Eric Lander fails to meet the moment. His nomination does not fill us with hope that he will shepherd the kind of transformation in science we need if we are to ensure science delivers equity and justice for all. ...

Lander, an MIT geneticist and former co-chair of the President’s Council of Advisors on Science and Technology (PCAST) — exemplifies the status quo.

The complaint is that Lander is a white male. More precisely, he is a Jewish man. Most of Biden's important cabinet appointments have been to Jewish men.

Lander, then at MIT’s Whitehead Institute for Biomedical Research, first argued that Celera’s whole genome shotgun wouldn’t work, then allegedly tried to strike a deal to collaborate with Celera, and later resumed his attacks on the company when the two projects finally published the human genome sequence in February 2001. Lander claimed that Celera couldn’t have completed its sequence without using mapping information from the public project and told a Nature reporter that the whole genome shotgun had delivered a “tossed genome salad” rather than an accurate readout of the human genome.

Still, Lander quietly retooled his lab to adopt Celera’s whole genome shotgun method when tackling the mouse genome, which he and others published in 2002.

It also cites this opinion:

This paper [on the history of Crispr] is the latest entry in Lander’s decades long assault on the truth. During his rise from math prodigy to economist to the de facto head of the public human genome project to member of Obama’s council of science advisors to director of the powerful Broad Institute, he has shown an unfortunate tendency to treat the truth as an obstacle that must be overcome on his way to global scientific domination.

I went to college with Lander, and I think he is a good guy. I have far more objection to Biden's other appointments.

The Trump administration was generally pro-science, without being shrill about it. So far, the Biden administration says that it is pro-science, but issued an executive order that seems to abolish girls sports on the theory that sex is a social construct. We shall see how things work out. Maybe Biden will advise Biden that there really are differences between men and women.