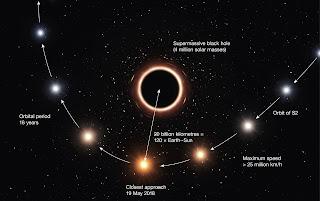 
Because in the paper, a team of astronomers show that they have observed a blob of dust sitting just outside the point of no return of a supermassive black hole, where the gravity is so intense that this material is moving at thirty percent the speed of light. And this wasn’t inferred, deduced, or shown indirectly. No: They measured this motion by literally seeing the blobs move in their observations. ...

Sitting in the exact center of the Milky Way is a supermassive black hole… and astronomers don’t use that adjective lightly. It has a mass over 4 million times that of the Sun, and all of that is squeezed down into a spherical region of space only 20 million kilometers across. The Sun itself is over a million kilometers across, so this is a tiny volume for all that mass. The gravity of such a beast is so immense that if you get too close, you cannot escape. Not even light, which travels at the fastest possible speed in the Universe, can get out. It’s like a dark extremely massive infinitely deep hole. ...

Their motions can be directly seen, and one, called S2, circles the center on an orbit just 16 years long, taking it to within a breathtaking 18 billion kilometers of the exact center.

Using Kepler’s laws of motion, the shapes and periods of the stars’ orbits can be used to find the mass of the object they orbit, and that’s where the 4 million solar mass figure comes from. Yet we see nothing emitting light there, no huge object, no star cluster. It really must be a black hole. Anything else would be extremely bright.

This is interesting, but it really doesn't much to do with relativity.

So I am surprised that BA talks about black holes as if they can exist in Euclidean geometry, without a singularity.

We don't see inside the black hole, so we don't really know. On the outside, it looks spherical. The above paper just describes a plain old Keplerian orbit as it might have been understood four centuries ago. Just one involving bigger masses and faster speeds than has been seen before. We don't see any light from the central mass, but that is just what would have been expected two centuries ago.

It is to BA's credit that he does not lecture us on how this confirms Einstein's view of black holes.
Posted by Roger at 8:00 AM