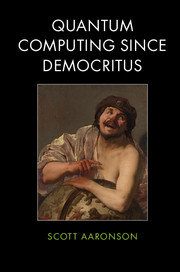 Since I often mention MIT complexity theorist Scott Aaronson, I am giving a plug for his book.

You can tell a lot from the first paragraph of the first chapter of a book. That is where the author carefully attempts to grab your attention and give you a flavor of the book. Some authors will rewrite it 20 times until they get it right.

Here is how Quantum Computing since Democritus starts:


So why Democritus? First of all, who was Democritus? He was this Ancient Greek dude. He was born around 450 BC in this podunk Greek town called Abdera, where people from Athens said that even the air causes stupidity. He was a disciple of Leucippus, according to my source, which is Wikipedia. He's called a “pre-Socratic,” even though actually he was a contemporary of Socrates. That gives you a sense of how important he's considered: “Yeah, the pre-Socratics – maybe stick ’em in somewhere in the first week of class.” Incidentally, there's a story that Democritus journeyed to Athens to meet Socrates, but then was too shy to introduce himself.

He is writing a new book, from his blog posts on similar topics. He has acknowledged that his own book has led people to quantum computer over-hype, and proclaims: "Single most important application of QC (in my opinion): Disproving the people who said QC was impossible!" He laments that "we as a community have failed to make the honest case for quantum computing". Much of the content of his book is on his web site.
Posted by Roger at 8:00 AM