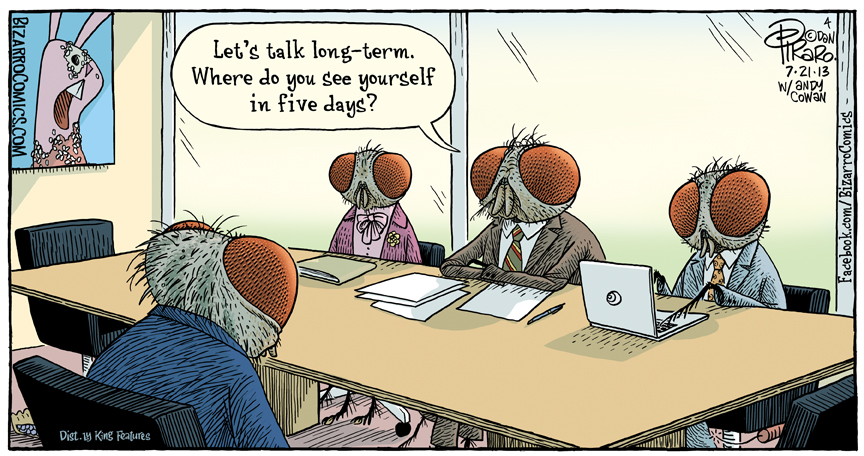 While this view of time seems obvious to a small child, there is an opposite view that the present flow of time is just an illusion. That view is sometimes called block time, and its roots go call the way back to the ancient Greek philosopher Parmenides. Albert Einstein and other smart people have subscribed to such a view, and even claimed that relativity theory requires it. A 2010 SciAm article says that many physicists argue that there is no such thing as time, and explains:


As you read this sentence, you probably think that this moment — right now — is what is happening. The present moment feels special. It is real. However much you may remember the past or anticipate the future, you live in the present. Of course, the moment during which you read that sentence is no longer happening. This one is. In other words, it feels as though time flows, in the sense that the present is constantly updating itself. We have a deep intuition that the future is open until it becomes present and that the past is fixed. As time flows, this structure of fixed past, immediate present and open future gets carried forward in time. This structure is built into our language, thought and behavior. How we live our lives hangs on it.

Yet as natural as this way of thinking is, you will not find it reflected in science. The equations of physics do not tell us which events are occurring right now — they are like a map without the “you are here” symbol. The present moment does not exist in them, and therefore neither does the flow of time.

That view of time certainly is reflected in science, and in my opinion, adopted by all sensible people. There is not a shred of scientific evidence against it. Most of the fundamental equations of dynamics are expressed directly in terms of the flow of time. I quote the article to point out that more than one view of time is possible.

The scientists who deny the flow of time will typically argue that the fundamental laws of nature are deterministic and reversible, and so the progress of time is an illusion and we have no free will to affect the future. Many argue for retrocausality, as they say the future determines the past as much as the past determines the future. Some people also deny that we can speak definitely about the past, as they say that quantum mechanics allows for multiple histories.

Einstein was unhappy about the flow of time:

Once Einstein said that the problem of the Now worried him seriously. He explained that the experience of the Now means something special for man, something essentially different from the past and the future, but that this important difference does not and cannot occur within physics. That this experience cannot be grasped by science seemed to him a matter of painful but inevitable resignation.

Three weeks before his death, in 1955, Einstein wrote, “People like us, who believe in physics, know that the distinction between past, present, and future is only a stubbornly persistent illusion.”

The objective world simply is, it does not happen. Only to the gaze of my consciousness, crawling upward along the life line of my body, does a section of this world come to life as a fleeting image in space which continuously changes in time.

A recent paper on The flow of time in the theory of relativity demonstrates the confusion over alternate ideas of time:

When we consider any experiment related to the theory of [special] relativity, like the Michelson-Morley experiment (see, e.g., Møller 1955, 26-8), we can always describe it in terms of an intuitive notion of passage or flow of time: light is send through the two arms of the interferometer at a particular moment – the now of the experimenter –, and the process of light propagation takes time to occur, as can be measured by a clock calibrated to the adopted time scale.

However when we consider the theory, in particular focusing on its development in terms of the Minkowski space-time and its application using the Minkowski diagrams, we immediately became puzzled by the implications of the theory regarding our intuitive notion of time, and the passage or flow of time seems difficult or even impossible to ‘find’ in the conceptual-mathematical structure of the theory (see, e.g., Dorato 2010, 1-2).

The supposed problem is with "probabilism", which has been defined as the doctrine that "the universe is such that, at any instant, there is only one past but many alternative possible futures". There is also a technical problem that what one person perceives to be the present might differ from what another perceives. But that does not really affect the philosophical issue of time.

Without getting into the subtleties of relativity and quantum mechanics, I am adopting the commonplace view that time flows from the past (that we remember and is certain) to the future (that we cause and is uncertain). In philosophy jargon, I am following the A-theory of time and maybe presentism, instead of the B-theory and eternalism. As the ancient Greek Heraclitus said, it is impossible to step into the same river twice. As the above SciAm article says, how we live our lives hangs on this structure. I want to explain how this view relates to counterfactuals.

Counterfactual events are always earlier in time than the hypothetical consequences. For example, the counterfactual might be that you jump off a cliff. The consequence is that you fall to your death. Because you understand this causal reasoning, you don't jump off the cliff.

Thus counterfactual thinking is how people imagine alternatives to reality, and make decisions. As such, psychologists and others have attributed poor decision-making to a faulty assessment of counterfactuals. For example, someone might refuse to fly in an airplane because of an exaggerated opinion of the risk of a plane crash.

Again, the Einsteinian physicists and B-theory philosophers reject all of this. Their reasons are more religious than scientific. There are no experiments contrary to the intuitive flow of time, and no generally accepted theory that is inconsistent with it. Their view is deficient, because they cannot grasp counterfactuals.

Update: N. David Mermin recently wrote a paper on trying to escape the B-theory of time:

Rudolf Carnap succinctly stated the problem of the Now in his report of a conversation with Albert Einstein:7 “Einstein said that the problem of the Now worried him seriously. He explained that the experience of the Now means something special for man, something essentially different from the past and the future, but that this important difference does not and cannot occur within physics. That this experience cannot be grasped by science seemed to him a matter of painful but inevitable resignation.”

Mermin says that this is "a longstanding puzzle in classical physics." The problem disappears with a suitable positivistic philosophy, altho Mermin does not exactly express it that way. You just have to rid yourself of warped Einsteinian thinking.
Posted by Roger at 8:00 AM