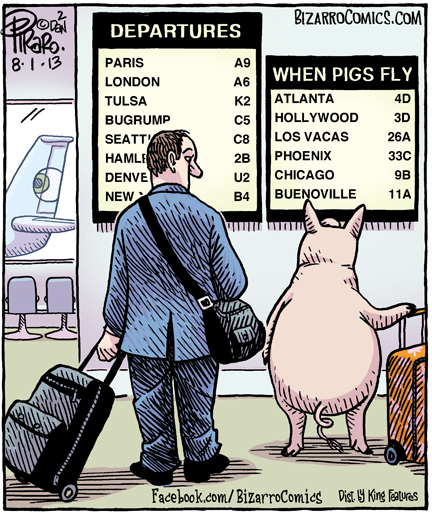 Consider the sentence, "if pigs had wings, they could fly." This is a very strange thing to say, as pigs do not have wings. And yet the sentence is readily understandable to children.

The English language has a construction called the "subjunctive conditional" for counterfactuals like this. Statements that describe reality are in the indicative mood, such as "pigs do not have wings" or "pigs do not fly". So are straightforward conditional statements, like "if pigs have food, they eat." If you want to suggest some sort of imaginary world in which pigs fly, you need the verb to be in the subjunctive mood.

Consider this illustration of the English subjunctive:


If he was in class yesterday, he learned it.
If he were in class today, he would be learning it.

The first is a simple statement about a boy learning in class. The second suggests that he was not in class, but it says something about some false scenario anyway.

The first is a true statement because it is indicative conditional with a false antecedent. Oswald did shoot Kennedy. Even if you are not sure that Oswald shot Kennedy but know that Kennedy was shot, then you will still accept the statement as true. It is only an assertion about actual historical events.

The second statement is much more complex. It uses the subjunctive mood to alert you that it is hypothesizing some counterfactual world and trying to reason about that world as if it were real. It is hard to say whether the sentence is true or false because you have to make assumptions about what else might be funny about that unreal world, and speculate how events might play out.

The counterfactual conditional is a false history scenario. In other cases, the counterfactual is a future hypothetical. For example, you could say that "if the Antarctic ice melts, New York would go under water."

The subjunctive is commonly misunderstood. In the famous 1968 zombie movie, Night of the Living Dead, Barbara says, "Johnny asked me if I were afraid." No, Johnny wanted to know whether she was actually afraid. He was not trying to create some counterfactual scenario. The correct grammar is "Johnny asked me if I was afraid."


If he was in line, give him a ticket.
If he were in line, he would be eating by now.

The first is indicative and factual. The second is subjunctive and counterfactual.

The subjunctive is not used often in English, unless there is some counterfactual being expressed. The verb "be" is subjunctive in "I suggest that they be removed." Then sentence does not say that anything has been or will be removed. It creates a hypothetical scenario where something is removed.

The counterfactual concept is essential, and so is the English subjunctive mood for expressing it.

Classics scholar Phuc Tran argues in a TED talk that his Vietnamese relatives are unable to ponder counterfactuals because their language lacks a subjunctive mood.

I am not sure how other languages deal with these concepts. Chinese does not even have past and future tenses, so it has trouble with expressing time as needed for counterfactuals. (I am not sure about all Chinese, as there are at least 300 different varieties of Mandarin that were more or less mutually unintelligible.)
Posted by Roger at 8:00 AM