The UK Guardian Science Weekly podcast recommends these books as the best science books of the year (gnl.sci.121119.jp.science_weekly_ads.mp3):

Brian Greene is interviewed (at 35:30 to 38:30), and makes three points: (1)the new idea of quantum mechanics is that you cannot predict with certainty; (2) the weirdness is that the other possible outcomes occur in parallel universes; and (3) this is the most conservative way of interpreting the mathematics.

All three points are false. Greene is treated as if he were some sort of physics genius, but what he says is as nutty as that of New Age spiritualists like Deepak Chopra.

As I have written, quantum mechanics needs no probabilities, and the multiverse is philosophy. And the Many-worlds interpretation is not any simpler or more conservative than other interpretations.

If the theory predicts that two alternatives are possible, such as a cat being alive or dead, and then one of those is observed, then MWI says that the other one happens in a parallel universe. That is supposed to be mathematically "conservative" because then you do not have to adjust your formulas to say that the unseen alternative is no longer possible. That is not being simple or conservative. That is just refusing to accept what you have observed.

The Guardian reporters go on to credit Greene with expanding our notion of science by speculating about ideas that can never be settled by observation. No, Greene is giving physics a bad name. 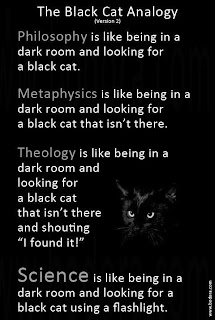 I found this image on an atheist site. If I accept this analogy, where is Greene's flashlight? He has no better way of illuminating anything that the philosophers and theologians.
Posted by Roger at 8:00 AM