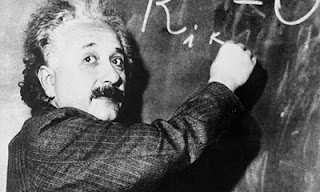 The kind of idle pastime that might amuse physicists is to imagine drafting Einstein's grant applications in 1905. "I propose to investigate the idea that light travels in little bits," one might say. "I will explore the possibility that time slows down as things speed up," goes another. Imagine what comments these would have elicited from reviewers for the German Science Funding Agency, had such a thing existed. Instead, Einstein just did the work anyway while drawing his wages as a technical expert third-class at the Bern patent office. And that is how he invented quantum physics and relativity.

The moral seems to be that really innovative ideas don't get funded – that the system is set up to exclude them.

No, Einstein did not invent quantum physics and relativity.

Einstein is the only Nobel science prize winner who got the prize for spare time work while holding a day job doing something else. If that were really how science is advance, then I would be all in favor of govt funding agencies looking at spare time grand projects.

But it never happens. First, Einstein was not really an outsider. He was finishing up is doctoral degree at a prestigious university while he took the patent office job. Second, Einstein's great 1905 papers were derivative expositions of research done by others, and did not have any significant impact on the advance of quantum physics or relativity. Third, there is no one else with an Einstein story.

Even if you don't believe me that the Einstein story is bogus, you ought to be able to verify that there are no other Einsteins. Attempting to fund Einsteins will fail.

Anthropologist John Hawks points out that Einstein did not need any grant money because he was not using any equipment or resources, and comments:

Most ideas that appear to be transformative in the end turn out to be bunk. Someone who compares himself to Einstein is overwhelmingly likely to be a charlatan. There should probably be a "No Einsteins need apply" clause in every federal grant program.

Hawks is right. He doesn't realize that Einstein himself was a charlatan, but he is not a physicist and I would not expect him to. But at least he recognizes the futility of funding anyone with an Einstein story.

I do believe in being skeptical about any story of extraordinary human achievement, when it is also claimed that no similar accomplishment has ever been achieved by anyone else.
Posted by Roger at 8:00 AM